Copywriters today have many role models to look up to.

We’ve mentioned several of them right here in The EMAIL ALCHEMIST blog.

This includes those copywriters who are generally regarded as the grandfathers of direct response marketing, such as John E. Kennedy, Claude Hopkins, John Caples, and Eugene Schwartz.

As well as the modern day copywriting masters, such as Gary Halbert, Gary Bencivenga, and Clayton Makepeace.

But there’s a master of copywriting who tends to get little attention.

His name is Victor O. Schwab, and he is arguably one of the top 10 copywriters of all time.

Schwab was the copywriter and marketing genius that made How to Win Friends and Influence People a bestseller, and thus made Dale Carnegie a household name.

He was also the copywriter behind ads for the famous bodybuilder, Charles Atlas.

In a two-page ad published in 1958 (and again in 1962 in his classic book, How to Write a Good Advertisement), Schwab put forth his powerful principles for writing a great headline… along with “100 Good Advertising Headlines – and Why They Were So Profitable.”

At this point in his career, Schwab had invested 44 years of his life in direct response.

“The copywriter’s aim in life should be to try to make it harder for people to pass up his advertisement than to read it.”

How important is the headline?

How important a part does the headline play in getting attention for the overall ad?

Schwab put it this way:

“Perhaps you have read somewhere that 50 per cent of the value of an entire advertisement is represented by the headline itself. Or 70 per cent. Or 80 per cent. The truth is that you cannot possibly evaluate it in percentages.

“For example, what percentage better is an automobile that runs beautifully as compared with one that won’t run at all? It’s the same with headlines.

“One can be almost a total failure in accomplishing even its primary purpose: to induce people to start reading the body matter (the copy) of the advertisement. Another headline can work almost like magic in enticing readers by the thousands into an ad whose copy moves people to action and thus moves products off the shelves.”

The headline, therefore, is the first major step to making the ad a lot harder to pass up than to read it.

A great headline stops you in your tracks.

It grabs your attention and builds curiosity and intrigue in a way that practically forces you to keep reading.

But contrary to what many people believe, that’s only where its job begins.

It’s got to accomplish a heck of a lot more than simply grabbing attention if it’s to be truly effective, and it’s got to do it mighty fast.

That said, Schwab believed there were two principal attributes, which he attempted to make “crystal clear” with a simple analogy:

“Let’s carry the analogy further. The train consists of a fast-moving modern Diesel engine and one car. The engineer will (most often) be the mother and/or father of a family. The one dependent car contains the rest of the family. They are all speeding along the track of their daily lives – moving fast in accordance with the hectic tempo of today.

“The message on that flag (the headline of the advertisement) must be persuasive. Yes, and persuasive enough to compete with all the other distractions of life. It must capture attention. And it must offer a ‘reward for reading.’ This reward must be sufficiently attractive to induce the reader to continue reading beyond the headline.

“It is obvious, therefore, that there are two principal attributes of good headlines. They select, from the total readership of the publication, those readers who are (or can be induced to be) interested in the subject of the advertisement. And they promise them a worthwhile reward for reading it.”

100 Good Headlines and Why They Were So Profitable

Schwab then went on in his two-page ad to share 100 profitable headlines.

The headlines he shared were chosen based on the lessons they provided in headline writing, as well as the stellar real-world profits they achieved.

Let’s look at a few of my favorites, along with Schwab’s own explanation of why each headline worked.

A sizable appropriation was spent successfully on farm magazines in this ad. Sometimes the negative idea of offsetting, reducing, or eliminating the ‘risk of loss’ is even more attractive to the reader than the ‘prospect of gain.’

As the great business executive Chauncey Depew once said, “I would not stay up all of one night to make $100; but I would stay up all of seven nights to keep from losing it.”

What farmer could pass up reading the copy under such a headline – to find out: “What was the mistake? Why was it ‘little’? Am I making it? If it cost that farmer a loss of $3,000 a year maybe it’s costing me a lot more! Perhaps the copy will also tell me about other mistakes I might be making.”

2. Why Some Foods “Explode” In Your Stomach

A provocative “why” headline. Based upon the completely understandable fact that some food combinations virtually “explode” in the stomach. Broad appeal.

(Relevant picture of chemical retort shaped like a stomach, starting to explode.) 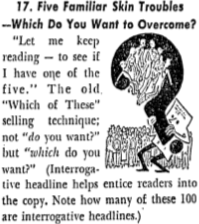 3. Five Familiar Skin Troubles – Which Do You Want To Overcome?

“Let me keep reading – to see if I have one of the five.” The old “which of these” selling technique; not “do you want?” but “which do you want?”

4. Are You Ever Tongue-Tied At A Party?

Pinpoints the myriads of self-conscious, inferiority-complexed wallflowers. “That’s me! I want to read this ad; maybe it tells me exactly what to do about it.”

As you go along you will notice how many of these headlines are interrogative ones.

They ask a question to which people want to read the answer. They excite curiosity and interest in the body matter which follows. They hit home – cut through verbose indirectness.

The best ones are challenges which are difficult to ignore, cannot be dismissed with a quick no or yes and without further reading, are pertinent and relevant to the reader. Note how many of the ones included here measure up to these specifications.

5. “No More Back-Breaking Garden Chores For ME – Yet Ours Is Now The Showplace Of The Neighborhood!”

A good example of a before-and-after headline which makes the turn from negative to positive.

Also worth noting: it has an effective element of excitement in it – a feature of many good headlines, communicating enthusiasm to the printed page.

6. “IMAGINE ME… Holding An Audience Spellbound For 30 Minutes!”

A profitable narrative-ad headline. Broad interest in this kind of ability. Narrator’s surprise and apparent humility lend credence and humanness to the statement.

Broad appeal: almost everyone has once had a pet money-making idea that others have thought foolish and impractical.

Sympathy for the underdog: “What’s the story of this man who ‘turned the tables’ on the people who ridiculed him?”

8. When Doctors “Feel Rotten” This Is What They Do

What’s the secret of the success of this well-known ad?

First: the suggestion of paradox. We seldom think of doctors as being in poor health themselves. And when they are, what they do about it is information “right from the horse’s mouth”; carries a note of authority and greater assurance of “reward for reading the ad.”

Note the positive promise of reward in “This Is What They Do.”

Also, the use of the unabashed colloquialism “feels rotten” gets attention; sounds human, natural. Besides it has surprise value – since the vocabulary of the advertising pages has a certain sameness and stilted quality.

Many a headline fails to stop readers because its vocabulary is so hackneyed. No word or phrase in it has any attention-arresting element of surprise, no words, expressions, or ideas that are not commonly used or expected in the headline of an advertisement.

This ad pulled only half the number of responses when a test was made changing “When Doctors Feel Rotten” to “When Doctors Don’t Feel Up to Par.”

9. It’s A Shame For YOU Not To Make Good Money – When These Men Do It So Easily

The colloquial “it’s a shame.” Sympathetic understanding of the reader: “You are as capable as these other men.”

(Headline, of course, is supported by photos and good testimonials.)

10. Greatest Gold-Mine of Easy “Things To Make” Ever Crammed Into One Big Book

Perhaps you have a new product (or even an old one) and still lack sufficient accurate data as to which, specifically, are the strongest single selling appeals to feature in your advertising.

In that case, it is often good strategy to “merchandise” the multi-purpose “coverage” of your product as thoroughly as you can.

By doing so, you avoid the risk of laying too much stress upon any specific appeal which may prove weak or ineffectual.

And, by exposing many of your product’s uses and advantages, you at least enable your reader to know what they are – so that he can judge for himself the ones which appeal most to him. 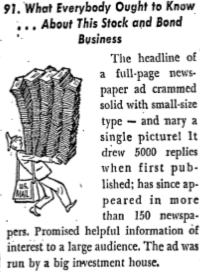 11. What Everybody Ought To Know… About This Stock And Bond Business

The headline of a full-page newspaper ad crammed solid with small-size type – and nary a single picture!

It drew 5,000 replies when first published, has since appeared in more than 150 newspapers. Promised helpful information of interest to a large audience.

The ad was run by a big investment house.

There’s a lot to be said for studying headlines that have worked in the past.

It’s been steadfast and true since the dawn of time, and it will remain so until the last light in the universe flickers out.

So the same psychological appeals that worked yesterday will continue to work tomorrow in some form or another… and that means the principles and strategies that made a headline successful yesterday can be applied to headlines tomorrow.

Study them… model them… use them to write your own profitable headlines.

Get started now by downloading the PDF of the full text of Victor O. Schwab’s famous ad, 100 Good Advertising Headlines – and Why They Were So Profitable.

Better yet, hop over to Amazon and grab a copy of his copywriting classic, How to Write a Good Advertisement: A Short Course In Copywriting.

Then leave us a comment below. We love your feedback…

Until next time, happy selling!