On a sultry afternoon in Los Angeles, back in 1986, an innocent little girl named Gloria woke up in a dumpster, covered with rotting garbage, behind the Tiki Ti cocktail bar on Sunset Boulevard.

She was terrified… and for good reason.

Because in a matter of minutes, a dozen armed-and-ugly thugs, most of them with prison tats and automatic weapons, would be marching down the alley to annihilate her…

… And she could already hear the pounding of their boots on the pavement!

OK, now what about the rest of the story?

It doesn’t exist. I made up this example to emphasize that feeling of “gotta know what happens,” which is the same thing you experience at the end or every episode of a series on Netflix or Amazon.

That feeling also propels us to keep reading, watching, or listening to every novel, magazine, parable, movie, comic book, kid’s story, the Sunday funnies… and some of the best ads in the world.

And that includes testimonials.

They’re perfect for turning into mini stories, especially the before and after kind that always grab people’s attention and fire up their hope for a better future. 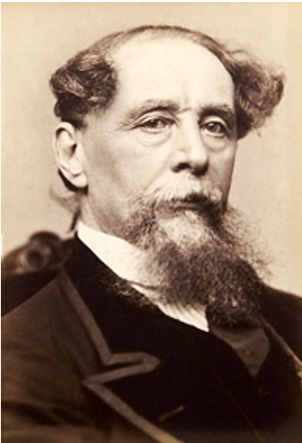 Now, we’ve mentioned this before, but it bears repeating that Charles Dickens novel, The Old Curiosity Shop, was published in installments from 1840 to 1841.

And of course, there was a cliffhanger at the end of each segment.

In fact, it was so popular that New York readers stormed the wharf when the ship bearing the final installment arrived in 1841, and 2 people drowned.

How would you like that kind of reaction to your marketing (except for the drownings, of course).

And what’s even weirder?

It’s SO obvious that they’re baiting us!

We KNOW they’re using the cliffhanger technique, but it doesn’t matter — we’re helpless to resist.

And is it any different with a sales story? Not at all.

That’s why we’re about to deepen your understanding of how to use stories in your marketing.

Because when it comes to persuasion, nothing is as gripping, enticing, and nothing LOCKS IN your attention all the way to the order button.

To make it even better, I’m pulling some of this content from Daniel’s full-pay storytelling program, Effortless Influence: How to Master the Art of the Sales Story, which has been selling steadily for years at $997.

First up, here’s a quote from Effortless Influence:

A well-crafted story is truly hypnotic. It is a form of guided imagery that helps your prospects to withdraw from their physical environment momentarily and explore their unconscious, where all decisions are ultimately made.

If you were to approach a person in the depths of such reverie, you would notice their eyes wide open like saucers, staring blankly into space. And if you speak to them, they will not hear a word that you say.

It’s amazingly powerful, so let’s say you’re a complete novice, but you need a hot story to ramp up your sales.

What do you do? 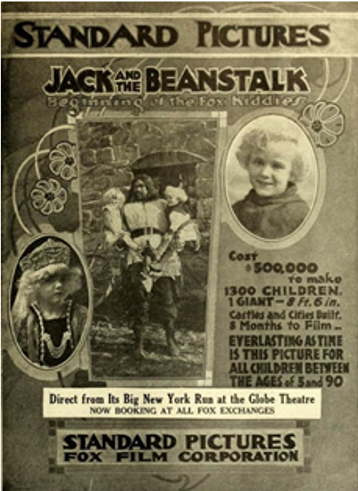 First of all, just like any marketing, you need to seamlessly match the story to your audience.

In other words, you DON’T tell a story about getting bashed, battered, and bloodied in a mixed-martial arts cage match… to a group of quilters, or bird watchers, or musicians.

You’ll lose them in a heartbeat.

Or in our case, at The EMAIL ALCHEMIST, our target audience is business owners, coaches, consultants, agencies and the like… who are trying to break out of a rut or take it to the next level.

So we’re not targeting newbie prospects (although we’ve taken many from zero to 6 figures) who don’t have a list (unless they’re expecting to get one up and running soon), because our strategies and systems are designed for “fixing” up-and-running businesses that need a jump start.

Secondly, you need a HERO of the story.

And the hero has to be someone your target audience can identify with.

Because subconsciously, THEY become the hero of the story.

So if you’re selling weight loss, you could use a story of someone shedding a hundred pounds and keeping it off… along with before and after pictures.

From one of our EMAIL ALCHEMY members, here’s a testimonial story I use because it inspires people and intensifies that glimmer of hope that their lives can change:

“Jim was frustrated and needed sales at the end of the year… the absolute slowest time for his business.

But no worries, he used our systems and strategically sent out a few “alchemized” emails to his list and he could hardly believe it when he got almost a quarter-million dollars in sales.

Thirdly, you need a target.

In other words, you need to compare where they are now with where they want to be.

This is where contrast becomes your best friend.

Because the more you can highlight the BAD of where they are now… and compare it to the GOOD your hero will experience… and make that gap as wide as possible… the more you’ll draw them into the story and make them want to buy. 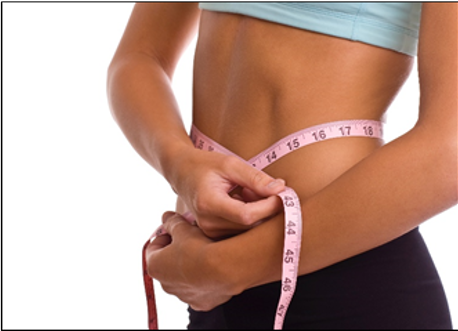 Also, make sure and weave plenty of detail into the story…

>>> How much weight will they lose?

>>> How much money will they make?

>>> How much easier will life become?

>>> How much happier will they be?

Forth, you need a PROBLEM to overcome.

And that problem can be almost anything, but they’ve gotta be able to identify with it…

-overwhelm with an impossible amount to do…

-how fast the internet is changing…

-binge eating and no way to stop it.

By identifying and fleshing out the problem so they’re subconsciously saying, “That’s ME”…

… They’re even deeper and more securely in your clutches. 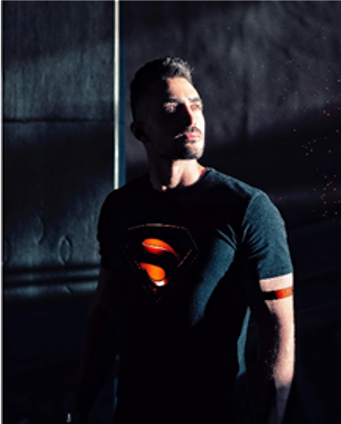 Fifth, your story needs a guru, teacher, guide, or wise mentor… and THAT’S YOU!

YOU are the knight in shining armor who’s coming to the rescue.

YOU are their Yoda, Gandalf, or Indiana Jones.

YOU provide the way out of the desperate situation they’ve fallen into.

And how do they get this salvation you’re selling?

OK, that’s a very brief overview of what you need in your story.

So to get absolute MASTERY of sales storytelling, check out this 2-DAY SPECIAL OFFER to help with the insanity of today’s marketplace.

Check out the link (enter promo code EI $500 OFF on check out) if you’re interested in the most powerful persuasion technique ever.

Here’s the table of contents. 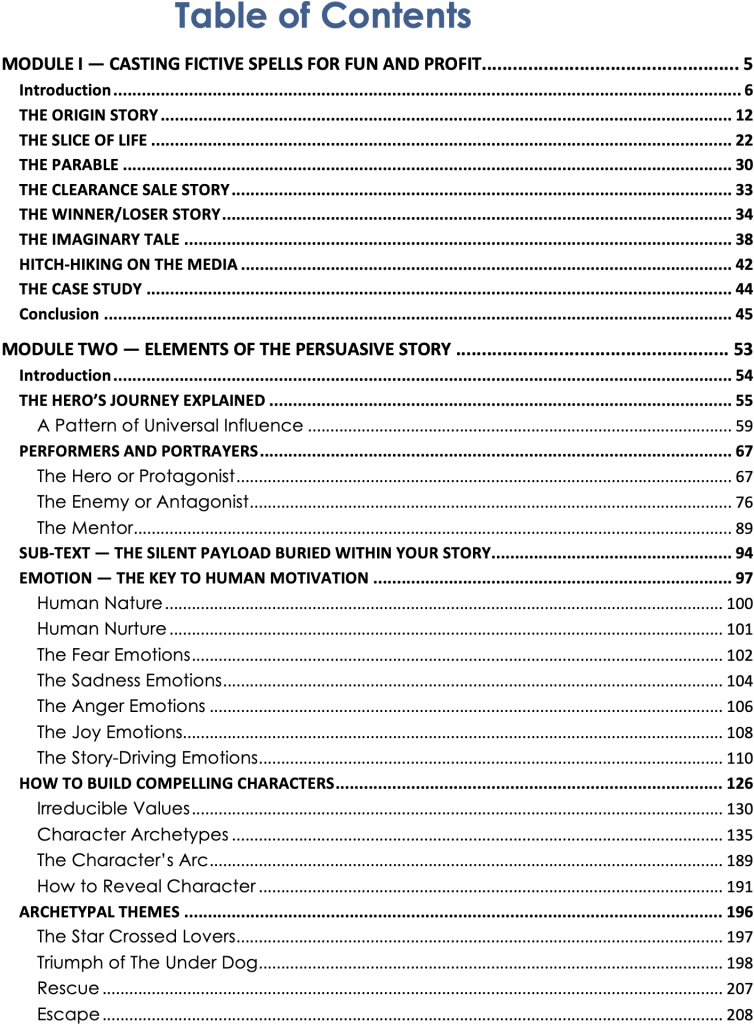 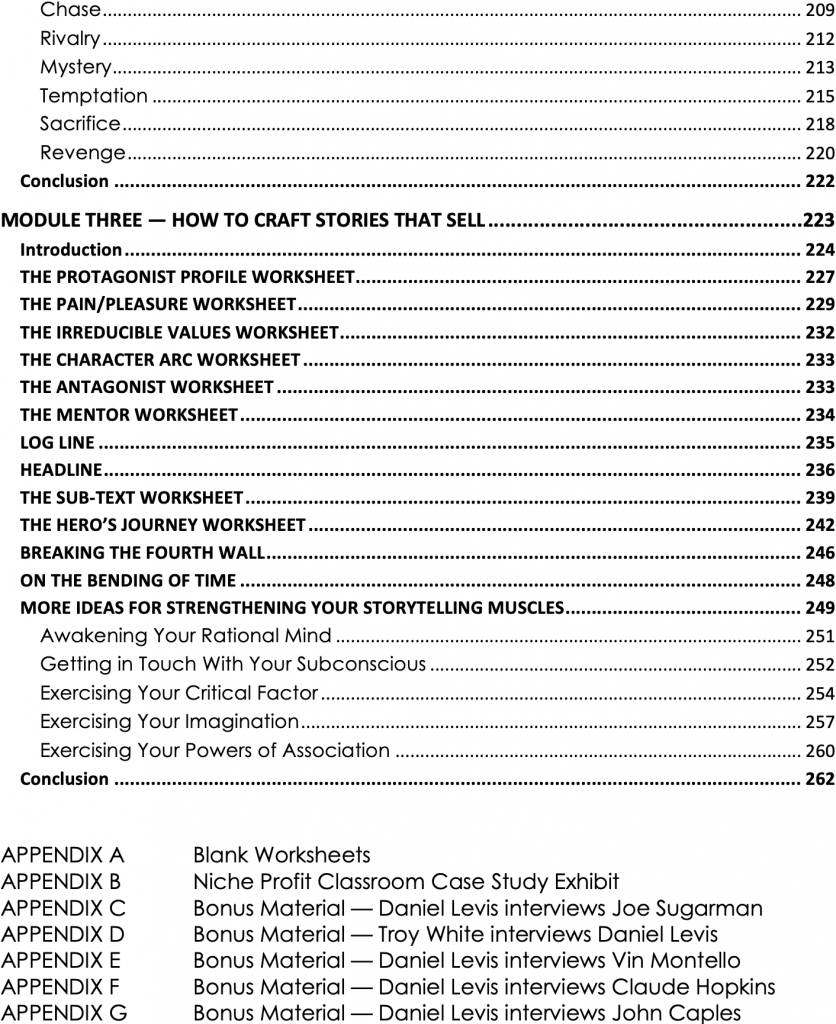