At a Gary Halbert seminar years ago, the great John Carlton was a guest speaker.

One of the things I heard John say was that the closer you can get to making your product or service do the impossible, without doing any work whatsoever to make that happen, the more you’re gonna sell. 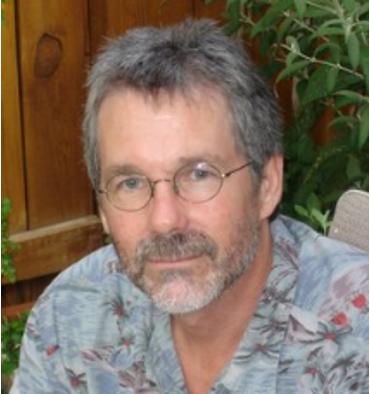 As an example, you take a pill at night when you’re feeling miserable, fat, stupid, and broke… and wake up smart, thin, rich, and happy.

Of course, there is no such pill, but it’s a good mental “template” to aim for as you’re creating your campaigns.

That’s one of the great persuasive elements of this case study of this famous Eugene Schwartz ad, which you’ll see in the headline I’m about to show you.

It implies that to solve a myriad of health problems, all you have to do is hold the palm of your hand over certain “secret” places on your abdomen.

And in case you’re new to marketing, Gene Schwartz was one of the most influential marketers of the era, and his book, Breakthrough Advertising, is still considered one of the best ever books on persuasion strategy, breaking into new and existing markets, and copywriting.

Another persuasion element, which is equally as powerful, is making your products seem exotic.

In other words, if it’s magic water made from the snow taken from the highest peak of Mount Everest, or a miracle nutrient extracted from the bark of a tree from the deepest, unexplored, pristine part of the jungle, you’ve got it made.

Because in our minds, the grass is always greener on the other side.

OK, then here’s the headline from this famous Eugene Schwartz ad:

This headline has it all, a magical cure from a mysterious land, and all you have to do is lie on your back and put your hand on your stomach – what’s not to love?

And if you remember your history, this was back when the U.S. was finally figuring out what was going on in China.

It started with Nixon’s visit in February of 1972, which was the first time in two decades that Americans saw any images of China.

So the ad, which first ran in 1979, was perfectly positioned to tap into our growing national curiosity about all the mysterious healing techniques coming out of the East, like acupuncture and Chinese herbs.

In his own words, here’s what Schwartz had to say about the ad which ran for 20 years, both in print and in direct mail ads:

“We paid the author well over a million dollars. I wrote it as a special favor for the author because he had done a special favor for me. He gave me back the use of my right hand after I had my stroke. I paid $125 for the layout. It’s as crude as can be. I never thought the thing would sell. Layout, letter, very crude, very small type. A lot of violations. I couldn’t get anybody to run it, so I started my own business to run it. “Burn Disease Out of Your Body Laying Flat on Your Back, Using Nothing More Than the Palm of Your Hand” are not my words. They’re the author’s words. I wrote seven paragraphs of this letter. But I had the ability to let this man speak for himself. And he still speaks to millions of Americans. We are mailing more in January than we mailed for the first eight years of the mailing.” 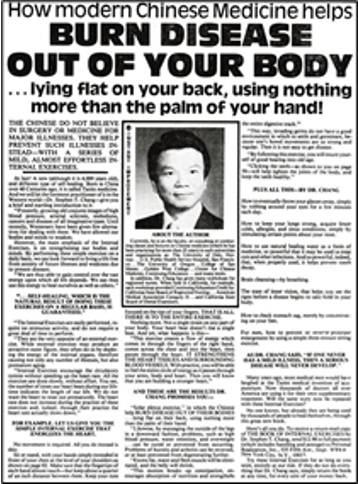 Here’s an image of the full ad, and we’ll discuss a few highlights that are particularly instructive.

First of all, we have the text of the all-caps subhead that’s the leading bit of copy after the prehead, headline, and deck copy:

THE CHINESE DO NOT BELIEVE
IN SURGERY OR MEDICINE FOR
MAJOR ILLNESSES. THEY HELP
PREVENT SUCH ILLNESSES IN-
STEAD – WITH A SERIES OF
MILD, ALMOST EFFORTLESS IN-
TERNAL EXERCISES.

This introductory copy sets the stage for creating credibility and curiosity. For instance, what the heck are “internal exercises?” And what a great benefit that there’s no surgery or medicine required to PREVENT illnesses in the first place.

At last! A new (although it is 4,000 year old), and different type of self-healing. Born in China over 40 Centuries ago, it is called Taoist medicine. And we will let the foremost practitioner—Dr. Stephen T. Chang—give you a brief and startling introduction to it.

How can you distrust something that’s been around for 4,000 years? 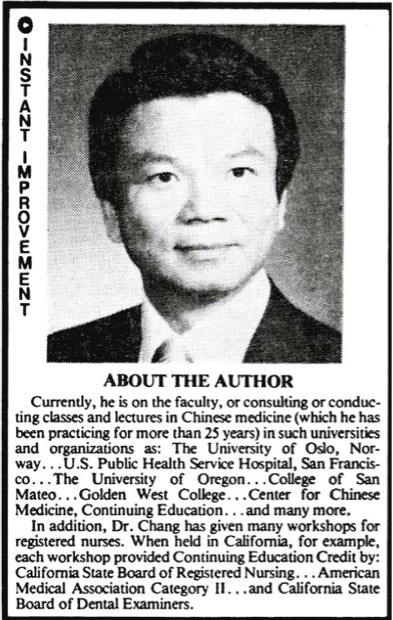 And right next to the above paragraph, in the box with Chang’s photo, Schwartz piles on the credibility with the number of years Chang has been teaching and practicing (over 25 years), and the numerous universities and organizations he’s been associated with.

But the one I like best, because it’s so clever, are the workshops Chang gave for registered nurses. This is good in and of itself, but then there’s the “implied endorsement” because of the fact these nurses get credit for the workshops.

After being a chiropractor for 20+ years, I know how carefully the various boards monitor their continuing education and it’s not all that closely. Yet the copy suggests that Chang had the full endorsement of these organizations. Clever.

Here’s another brilliant bit of copy that shows how much better and safer the “internal exercises” are and how dangerous those other kinds of exercises are:

Of course, if you made the following claims today, the FDA would jump on you faster than a chicken on a June bug.

So run everything past a lawyer before you say anything like the following: 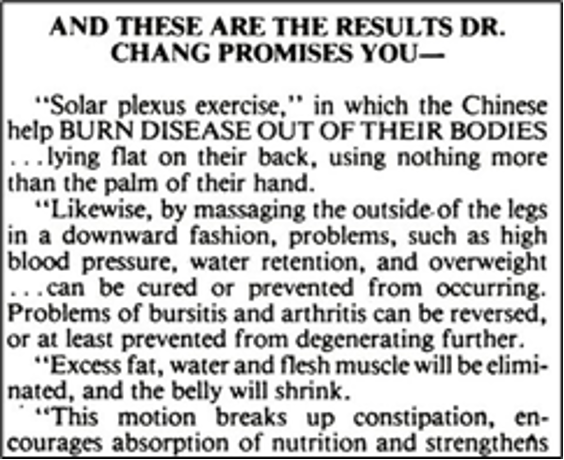 One more thing before we wrap this up.

Internalizing great copy is a powerful way to strengthen all aspects of your marketing.

The great Gene Schwartz, when he was a copy cub in the 1940s, could recite from memory some of the best ads written by the masters like Maxwell Sackheim, Claude Hopkins, John Caples and many others.

Schwartz has fabulous rhythm and flow and you’ll absorb it into your DNA if you’ll write his ads, and ads by the masters, out by hand, as recommended by Gary Halbert.

You’ll also deepen and speed up the process by reading ads out loud and memorizing them at the same time.

That way you’ll hear, feel, and internalize their pacing, rhythm, and tempo.

So grab some of your copy of The Steal These Secrets Swipe File, and get to it… repetition is the mother of skill.