What you call things is important.

Not just for movies and novels, but for non-fiction books and blog posts and lead generation magnets and signature programs.

Oh yes! The name of your ebook… home-study course… webinar… special report… platform, whatever world domination plot you’re hatching — should make people want to open it, RIGHT NOW, to find out what’s inside.

It should shout: “Hey You!

“Yeah you, with the hole burning in your pocket… STOP!

Do your titles do that?

Do they stick out like a whore in church?

Or do they lay limp… docile and quiet, like a strangled nun?

Have I ever told you the story of E. Haldeman Julius?

For those of you who don’t know, Julius was a publisher who sold books for 5 cents a pop through mail order in the 1920s – hundreds of millions of them.

When a book failed to sell 10,000 copies or more in a given year, it was removed from offer and sent to the “hospital” — a dimly lit cave in the basement…

It was here that Julius personally attended to the book and attempted to nurse it to financial health.

What happened in the “hospital”, you ask?

Julius simply gave the book a new title. Sometimes, all it took to dramatically increase sales of a particular book was to give it a new name. A new name!

As years passed, however, Julius began to notice unusual patterns… 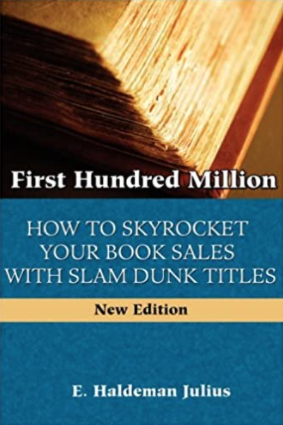 One of the things he noticed was that the buying public was far more interested in what a person had done than they were in the person who did it.

Nietzsche: Who He Was, And What He Stood For barely sold 10,000 copies. The same book renamed, The Story Of Nietzsche’s Philosophy sold 45,000 copies.

The Truth About Mussolini sold 15,000 copies. The same book renamed, The Facts About Fascism sold 24,000 copies.

Something to think about the next time you get a notion to titling something.

What else makes a great title?

Funny, I was just thinking the same thing …

Why don’t I grab a handful of books off my bookshelf right now and we’ll play a game of “HOT” “NOT”? I’m willing to bet that by the time we’re done you’ll have a neat little checklist you can use the next time you go naming. What say?

Here I go… I’m closing my eyes and reaching into the bookcase to pull out a stack of books at random.

Corporate Networks — The Strategic Use of Telecommunications by Thomas Valovic.

It’s been a long time since I read this, around 25 years I believe.

What I like about this title is that it tells you what the book is about. You get a general sense from the main title, and the sub-title dials it in a little more. On the other hand, it’s not very provocative or benefit-rich.

The word “strategic” imparts a measure of craftiness and intelligence to the owner of the book, and the promise of privileged information capable of creating advantage. Overall, it’s not a bad title. Got me to buy the book.

If it was me naming this book, I think I would have amped it up, just a little: Corporate Networking and Telecommunications Secrets — How to Slash Costs, Boost Sales, and Strike Fear in the Hearts of Your Competitors.

Let’s see what else I’ve got here: Write More, Sell More — Strategies and Shortcuts to Make Your Writing Profitable, by Bob Bly.

I did not buy this book, so I don’t recall how the title struck me at the point of purchase. It has not compelled me to read Bob’s book, that much I know. Each time I look at this title I get a little puzzled. But it’s not the kind of puzzlement that makes me want to reach for the book and open it.

Well I’m opening the book now, and right here on page 3, Bob explains that while his previous books were about corporate writing — business writing, ad copywriting, technical writing, public relations, and sales promotion, this book will help you no matter what you write — novels, plays, poems, scripts, screenplays, whatever.

I’m sure this is a fine book, but as far as the title goes, I’m going to vote NOT. This title just doesn’t jump off the shelf and grab me. If I had to title a book like this, I’d probably put some kind of a qualifier in the name. Something that says, hey, this book is for you. The Writer’s Almanac of Productivity Secrets — If You Write for Money You Need This Book. Perhaps something like that. 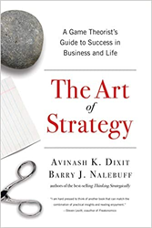 The Art of Strategy — A Game Theorist’s Guide to Success in Business and Life, by Avinash K. Dixit and Barry J. Nalebuff.

Here’s a book that jumped out at me in the bookstore one day. I picked it up because of the title and ended up buying it. Maybe I like the word “strategy”. Come to think of it, this word has been in all of the titles we’ve looked at.

“The Art of…” is another popular phrase you see in many titles. The Art of this, the art of that, it’s a catchy little phrase. Like the word “strategy”, the word “art” implies mastery and achievement.

Thinking back on the day I bought this particular book though, I’d have to say it was the combination of the benefit “success” with a unique new twist on the mechanism for achieving it, namely, “game theory” . That’s what sealed the deal. I just had to pick this book up to understand the connection.

WORDS THAT WORK — It’s Not What You Say It’s What People Hear, by Frank Luntz.

I’m going to give this title a HOT designation. I just love this title. It grabbed me like a tractor beam when I saw it.

Notice the alliteration and rhyme in the main title, “Words That Work”. Putting a little music in your title is smart. It doesn’t add anything to the literal meaning, but it gives your readers a little zap of enchantment that makes them want to stay with you.

Again, it was the sub-title that really nailed me with this one. “It’s Not What You Say It’s What People Hear”. This is what I call a profound truism. A short, simple statement drawn down from long experience… intuitively testable, yet you could spend a lifetime getting it right.

This is the kind of zinger that causes a little light bulb to appear overhead. The reaction is “YES, isn’t it so true… yet so hard to continually put into practice. How do I get better at this? I better open the book.”

HERD — How to Change Mass Behavior by Harnessing Our True Nature, by Mark Earls.

This book came to me as a recommendation along with a handful of other titles. Even when a book comes endorsed, the title is still a factor. If the title leaves me cold I still may not buy the book. If memory serves me correctly I did not buy every title my friend recommended.

The one-word metaphor intrigued me in this case. There’s something about a single word that begs further reading. And the curiosity is paid off immediately here, Though I have to wonder if more than a few people might not make the connection between “mass behavior” and “herd”.

There’s a big promise here, “how to change mass behavior”, though it’s up to the reader to determine the rationale for wanting to do that. The word “true” piques my curiosity. It implies a new take on accepted wisdom. Overall a good title, I think. Perhaps a little risky, but it worked on me.

COERCION — Why We Listen to What “They” Say, by Douglas Rushkoff

I was walking through the local library one day and this title literally jumped off the shelf, yanked my head in its direction, and twisted my whole body toward it. That’s part of the beauty of the single word title — HUGE FONT.

Your main title’s job is simply to stop your prospect in his tracks and get him to focus his attention on the sub-title, where the real selling takes place. You can’t cry WOLF though. What follows has to gel to create a compelling thought that makes the reader want to open the book.

This title certainly does that. With just a few words the sub-title explains the main title while raising a question that propels the reader forward. And it implies conflict. It’s us against them. I’m going to vote HOT. 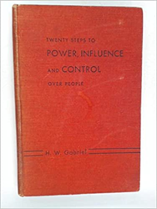 20 steps to POWER, INFLUENCE and CONTROL OVER PEOPLE, by H.W. Gabriel.

This title is interesting in that it’s the only one-part title in the books I grabbed randomly off the shelf. There’s no subtitle.

It’s very matter of fact, straight to the point, a little edgy and provocative, too. I bought this book in a used bookstore based purely on the title. I barely opened the book before buying it.

The book was a disappointment when I opened it up — poorly written, offering questionable advice, some of it downright weird. But the title is decent. 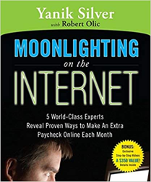 MOONLIGHTING on the INTERNET — 5 World-Class Experts Reveal Proven Ways to Make An Extra Paycheck Online Each Month, by Yanik Silver and Rob Orlic.

This is one of the longest titles in the pile. I did not buy this book. It’s one of those anthologies where a number of different people chip in a few pages each. I think it’s a brilliant way to write a book. Let other people do the work. I was one of the contributors. And Yanik was kind enough to mail me a copy.

This book and The 4-Hour Work Week are in some ways quite similar in intent and target. They come at more or less the same market from two different angles. Of the two approaches, I think this one is the steeper hill. As far as titles go, it leaves me cold as a dead fish…

Slaving away in the evening after a full day’s work to make an extra paycheck — YUCK! I don’t want to read about that. It’s a horrible image. I’d much rather escape the 9-5, live anywhere, and join the new rich, wouldn’t you? I like the book, but the title comes down decidedly on the NOT side of hot.

So that’s just 2 HOTs out of eight.

You’re most likely part of the target market.

So give it a shot…

Corporate Networks — The Strategic Use of Telecommunications

HERD — How to Change Mass Behavior by Harnessing Our True Nature

COERCION — Why We Listen to What “They” Say

20 steps to POWER, INFLUENCE and CONTROL OVER PEOPLE