We’ve talked about BULLETS before, but it’s never enough because bullets are SO important.

You should study and collect good bullets, keep them in a file, and read them regularly to “prime the pump” of your writing.

The great thing about bullets is they’re perfect for catching the reader who’s skimming, they also create intense curiosity, and are super-easy to read.

In fact, I heard a marketing wizard say (can remember who) that the purpose of your introduction is to get the reader to the bullets asap.

So how do you write great bullets?

It’s simple, though not easy.

The most straightforward way… and the fastest…  is to study great bullets then work hard at writing them yourself.

Rinse and repeat as often as possible.

Now, I wish it were easier and I could install a thousand hours of writing practice directly into your brain like a scene from The Matrix… but I can give you the tools to motivate you to practice your skills.

So here’s your short course in mastering the skill that grabs, and locks in, attention.

Dig In and Get Good

A quick story, then some hard-to-find bullets.

Some years ago, I was involved in a marketing project with a dentist and an insurance agent.

But it fell through when the agent flaked out… which left me and the dentist holding the bag.

And since I’d talked the dentist into joining the project, I offered to make up for his efforts by providing copywriting for him.

So what did he want in return?

BULLETS for a big pile of his products.

I ended up writing 350 bullets which was like being in bullet bootcamp.

Frankly, it was unpleasant, grueling, frustrating… but an extraordinary-helpful experience because it’s helped me 100 different ways in my copywriting.

And YOU’LL get better each time you study the experts then write your own bullets. 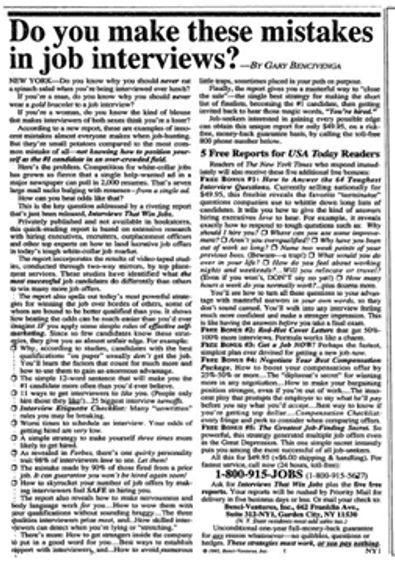 So first, let’s take a look at one of the copywriting masters, Gary Bencivenga.

These bullets were for a long-lost, full-page magazine ad with the headline, “Do You Make These Mistakes In Job Interviews?”

They’re hard to read, so here are a few of Bencivenga’s powerful bullets…

>>> Why, according to studies, candidates with the best qualifications “on paper” usually don’t get the job. You’ll learn the factors that count for much more and how to use them to gain an enormous advantage.

>>> The simple 12-word sentence that will make you the #1 candidate more often than you’d ever believe.

>>> Interview Etiquette Checklist: Many “unwritten” rules you may be breaking.

>>> Worst times to schedule an interview. Your odds of getting hired are very low.

>>> A simple strategy to make yourself three times more likely to get hired.

>>> As revealed in Forbes, there’s one quirky personality trait 98% of interviewers love to see. Let them!

>>> The mistake made by 90% of those fired from a prior job. It can guarantee you won’t be hired again soon!

>>> Hot to skyrocket your number of job offers by making interviewers feel SAFE in hiring you.

Now here’s another (overlooked but powerful) way to use bullets that don’t look like bullets.

Take his next paragraph, for example, which is really just a number of bullets…

The report also reveals how to make nervousness and body language work for you… How to wow them with your qualifications without sounding braggy… The three qualities interviewers prize most… and… How skilled interviewers can detect when you’re lying or “stretching.”

So who else has taken bullet writing to a high art form?

None other than Gary Halbert, the “Prince of Print.”

Here’s a quickie from a lead generation space ad that ran in the Wall Street Journal in 1989.

If you called the number you got an 8-page sales letter that fulfilled the promise of the 6 bullets, which are (in case you can’t read it):

1. How to get the exact name and address of every man, woman, and child who is ever likely to become one of your customers!

3. Hot to get yourself or your product featured on cable TV… without spending a penny!

4. How to get as much money as you need to expand your business… and get it without borrowing.

5. How to get movie and TV stars to help you sell your products and services… and get them at dirt-cheap prices!

6. Hot to use cheap little classified ads to generate an enormous daily cash-flow!

One more thing worth mentioning.

Numbering your bullets will pull readers along just like telling them, “I have 3 important items to show you. First… “

So vary your approach to prevent reader boredom… the death knell for your persuasion.

Slime Sells, and How to Profit from Bottom Feeding

The legendary Gene Schwartz was a sophisticated guy.

He owned one of the largest, private, modern art collections in the country.

Yet his target audience was often the same as the tabloids.

For instance, many of his ads ran in Weekly World News.

If you don’t know about this lofty publication, its sleazy headlines are infamous:

I Was Bigfoot’s Love Slave

Frankly, the whole thing is just bullets strung together with a little bit of copy in between… a powerful strategy if your bullets are hot.

Here are a few of his bullets:

>>> No harmful side effects… safer than aspirin.

>>> Can alleviate, and in many cases, even reverse more than 140 serious diseases…

>>> Is so safe, it’s been made available without prescription in over 80 countries.

A Few More… From the Master

No discussion of bullets is complete without touching on the reclusive marketing genius, Mel Martin.

His bullets have transformed businesses… bringing in hundreds of millions of dollars. 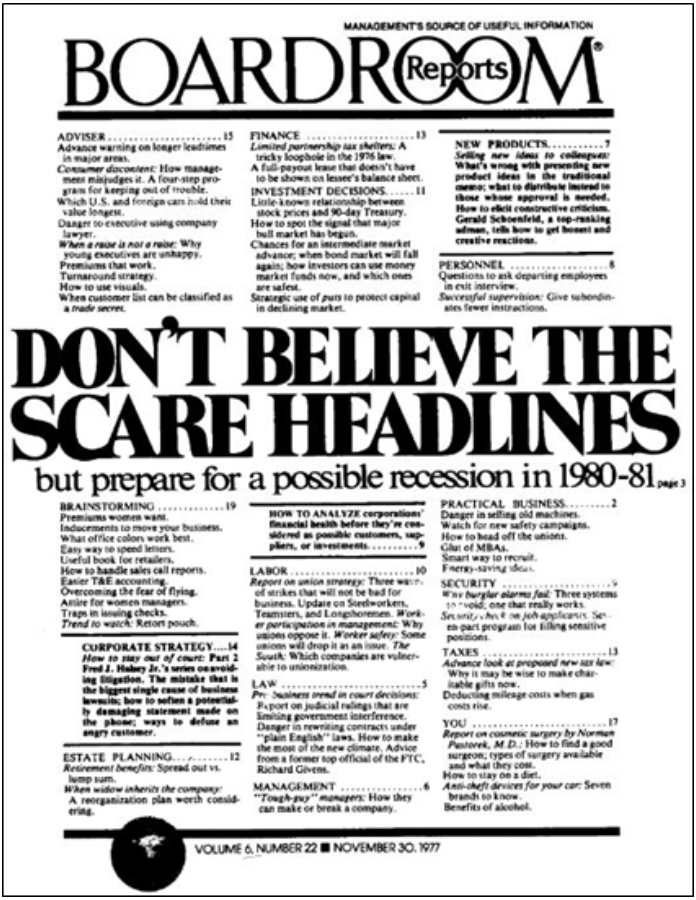 And if you look at the image, you’ll see that the index for a book is just a full page of fascinating bullets.

Here are a few so you can read them.

There are headings on the page, such as:

>>> Consumer discontent: How management misjudges it. A four-step program for keeping out of trouble. Which U.S. and foreign cars hold their value longest.

>>> When a raise is not a raise: Why young executives are unhappy.

>>> When a customer list can be classified as a trade secret.

OK, so dig into these bullets, drive them deep into your DNA, and strengthen every aspect of your marketing.

And leave us your comments. We appreciate it!