When I began my career in selling, I was about as green as a head of Chinese cabbage.

Luckily, I also had a thick skin… and what I lacked in finesse I made up for in good old piss and vinegar …

Back in the Stone Age of selling, believe it or not, we used to walk around cold calling on business people in the flesh.

And one day, my enthusiasm for rejection almost got me ejected from a perfectly good prospect’s office. I had barged in without an appointment, and began delivering my sales talk. That’s just what we did.

Until one day it hit me like a ton of bricks …

I was losing plenty of excellent prospects because of my approach.

Not everyone was as honest as the kind teacher who nearly threw me out of his place of business. But the vast majority of prospects, though they listened politely, were tuning me out just as surely. And many of them really did have a genuine need for what I was selling.

I came to the realization there’s little point telling a sales story to someone who isn’t first sold on the importance of hearing it. Duh!

So I abandoned my rude habit of “dropping in” on people and immediately trying to sell my service. Instead, I began to sell something entirely different …

After introducing myself in a way that somehow included the main unique benefit my company had to offer, I immediately went on to admit I didn’t know if what we had to offer was right for my prospect or not. And I simply asked for an opportunity to explore their situation to see if it was. I went from “cold calling” to what Zig Ziglar calls “warm approaching” …

I had a chance to figure out what my prospects really wanted. And in many cases, I was able to give it to them.

Soon I set my sites on larger clients that weren’t easily reached in the flesh, and began finding felicity with a phone. I found the same principle applied.

There was no point jabbering juicy benefits until I’d gotten permission to do so. I used the same quick introduction technique, followed by an unusual question, “Am I calling you at a bad time?” This allowed my prospects to say what they loved to say “NO”, and I was in like Flynn.

Later I abandoned the practice of approaching people in person entirely and began automating the whole front end of the sales cycle using the Internet. 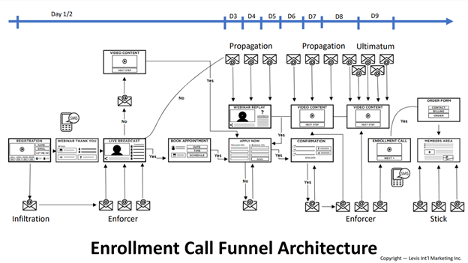 Do you have one of these?

When built correctly, they are a marvel of automation that virtually eliminates sales resistance.

Try picking up the phone and getting through to one person an hour and not have that person rudely slam the phone down on your ear.

Try burning your life away on social media, kibitzing in groups and glad-handing in forums and see where it gets you.

When I was selling telecom services, the first thing I sold was the consultation, which was an opportunity for the prospect to explore their situation, to think divergently about their problem, and weigh their options.

It was the sale before the sale… free, low key, and truly valuable to people.

Online, that means selling your prospects on allowing you to help them crystallize their thoughts about a given problem. And you do that by offering free information that does just that.

Think of your funnel as a Trojan horse that effortlessly enters the confines of the prospect’s mind fortress… creating tons of credibility and rapport… and most importantly, selling your prospect on the importance of gaining your ear and discussing the specifics of their situation.

Imagine you had one of these funnel things working for you, 24/7…

Imagine your calendar jam packed with pre-sold prospects and spending all your time enrolling high-paying clients.

Yes, it can happen for you in 2020… when you build a high-powered funnel like this.

So why not apply for a free strategy session and let’s see if it makes sense for you?

When you switch the polarity, reversing the direction of outreach, you automatically reframe the selling encounter.

When you are the one reaching out, it creates repulsion.

When the prospect is reaching, attraction. And that’s when everything gets so much easier and more profitable…

You’re no longer fighting to make your case or trying to convince anyone of anything.

You’re simply harnessing the power of reverse psychology and being pulled ahead by the natural forces of human nature.

This is the true power of marketing. It makes selling superfluous.

Isn’t it time you sat back and started taking orders?

Apply for your free session today!

Yes, it takes some spadework and expertise to build a productive funnel.

No, you should not go it alone.

But build it you must.